I’ve made a habit of issuing myself yarn challenges, and, as of late, it’s been bouts between me and yardage. This round of playing chicken with the yarn turned out just dandy.

I wanted to see if I could make a tunic-length, cowl-necked, long-sleeved sweater – with cables, no less. And indeed, I did. Though it ended up a touch shorter than envisioned, and the sleeves were a smidge tight, they still work! And the upside? The snugness of said sleeves disguises the unsightly “ladders” left behind from my sloppy in-the-round dpn work (the trick to avoiding that is pulling tight on the stitches when switching needles, correct? I must remember to try harder next time).

Incidentally, this be the first (as well as the last) long-sleeved sweater I’ve ever made. The second-sleeve syndrome was avoided through a good supply of dvds (including the Indiana Jones hotness mentioned in an earlier post, as well as the first 3 seasons of How I Met Your Mother). Without those dvds, I’m afeared those sleeves would still be unfinished.

Stag Constructions, for those Interested:
In the round, bottom-up raglan. I’d never attempted a sweater in this particular manner before.
Because of my playing chicken with the yardage, I decided to do a provisional cast on when it came to the sleeves, so that I could assess the yarn situation after I had begun the cowl and see just how long I could get away with making said sleeves.
I do not suggest this construction, or at least, not on a single set of circs. It was extremely awkward and tight the first 5 or 6 rows after joining the provisional-sleeves.

Also, the sweater would have benefited from my thinking through what I would do with the cables when I got to the sleeve juncture. I could have made the transition much more smooth by altering the staghorn cable pattern slightly, and turning some knit stitches into background purl stitches (see the second photo in this post. The slightly awkward decreasing around the armpit is visible there).

For waist and bust shaping, I simply hid my increases and decreases directly beside the cable pattern.
The cowl is a progression of 3 different needles sizes, getting larger as you near the edge of the neckline. I wanted it to be a bit bigger and floppier, but with only the 8 skeins I knew I’d have to compromise.
The greatest upside to this project? Stashbusting!

At the “photoshoot”, I frolicked among the gardens of a nearby historic home and civic museum. I got a few cool snaps, and wanted to share.

On the gates in the garden yard. The pineapple was a symbol of welcome that was in vogue in the 19th c., when this home was built. 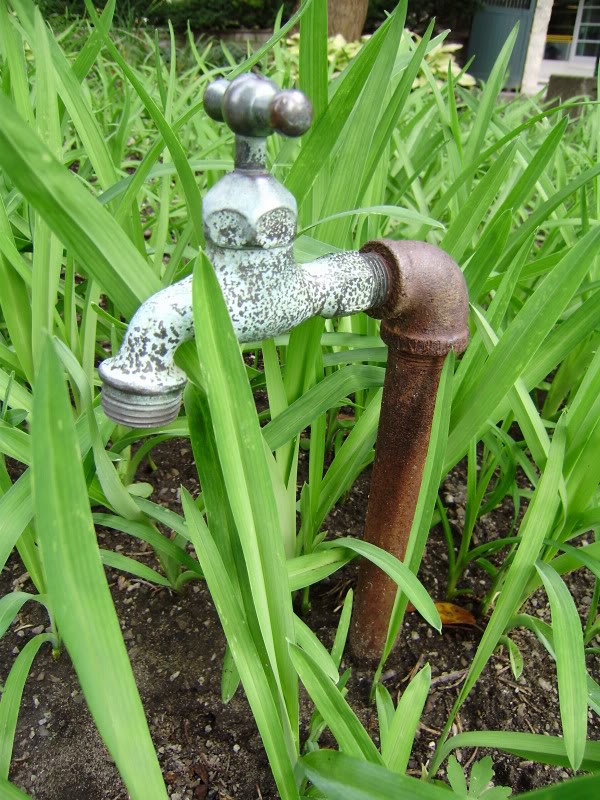 Backyard water tap, with some cool weathering, hiding among what’s probably close to the last bits of green green sprouts of ’09.

A pear tree has been dropping its fruit, and the bees have been feasting.

Lovely beautiful snapdragons. Nature has an amazing sense of colour.